A Boat for Dreamers
by Natalie Atwell 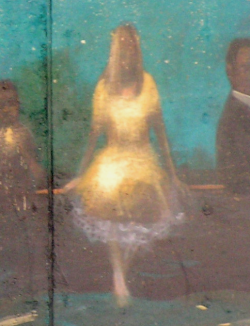 Ragsdale started with this character based off a photo of his neighbor sitting on her porch and worked outwards.

In December 1825, intellectual idealist Robert Owen gathered together scientists, artists, educators, and reformers under the idea that knowledge transferred through proper education was the key to freedom and equality in society. They boarded an 85 foot keelboat in Pittsburg, Pennsylvania and floated down the icy Ohio River towards New Harmony, Indiana to settle their utopian community. They dubbed their boat, ‘The Boatload of Knowledge.’ 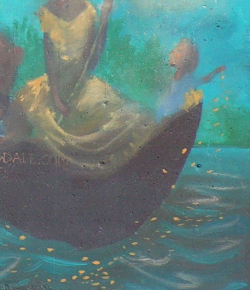 Like a flower girl at a wedding, this young girl sprinkles flower petals from the front of the boat for the procession.

In 2011, Indianapolis artist Kyle Ragsdale used these nineteenth century pioneers and their boat as inspiration for his 128 foot mural along the canal downtown. Hoosier Hospitality on a Boatload of Knowledge is part of the 46 for XLVI mural project that brought artists from around the country to Indianapolis to enhance our urban landscape with art in preparation for the recent Super Bowl. In the mural, Ragsdale worked to combine the essence of those adventurers with the nature of Hoosiers. “To me,” explains Ragsdale, “one of the great things about Indianapolis is the people and community; the way that people care for each other and are helpful and kind. I think that is one of our greatest resources. I wanted that feeling of hospitality and community and doing things together.” The piece features more than fifty unique characters mingling together playing games, sharing food, and making music as they float down the river towards their new life. 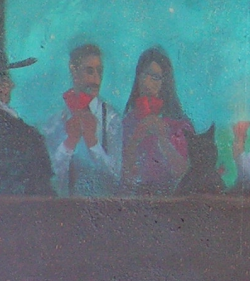 These cards players are real people Ragsdale meets every week to play Ticket to Ride.

Ragsdale categorizes himself as an intuitive painter. “So I don’t necessarily know what I’m gonna do before I do it,” he says. Before he began painting, Ragsdale had a rough sketch of his boat with loose outlines of figures but he didn’t know what they would be until he had brush in hand. “I would paint a flat wash and then I would paint this kind of dark shape. And then what it suggested to me, I would go with that.” This style leaves a lot of room for creativity and surprises for the artist. One day, Ragsdale was working on the outlines of a group of men wearing top hats near the south end of the boat when a little boy and his mother walked by. The mother asked her son what he thought the character was and he said, “I think it’s a chef!” Ragsdale says, “I would have never thought of a chef.” And so he made that figure a chef. But that’s not the only inspiration from the community Ragsdale brought into his mural. Many of his figures are based on reference photos of friends, neighbors, and other Indianapolis locals. 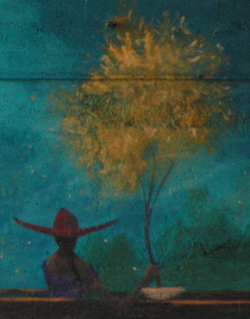 A fictional woman wearing a sombrero brings a tree with her on the adventure of starting a new life.

Working on the canal, Ragsdale received a lot of positive feedback from the community while he was painting. “I think it proved my point about Hoosiers. People were very appreciative. Even if they were running, or biking, they would be like, ‘Thank you! That’s great that you’re doing this!’ There’s been a really positive thankfulness that we worked on it.” The finished boat is now populated with people ranging in age, gender, and ethnicity intermingling harmoniously and Ragsdale hopes this image isn’t lost on his audience. “This may be a utopian idea like the Boatload of Knowledge, but the idea of our different cultures coming together to make something really interesting and that idea that our differences can be really beautiful together rather than conflict.”

What is the best way to view your mural? "Moving along with it, on the same side of the canal. Up close you get a lot more detail of what’s going on. I like coming at it from the south going north."
What was one of your biggest challenges? "Parking was a big deal. I parked really close to my mural and had to feed the meter and remember to feed the meter. I did get lots of parking tickets. I think it was maybe only $60 overall."
Tweet
add a comment