The Leck Aquarium
by Natalie Atwell 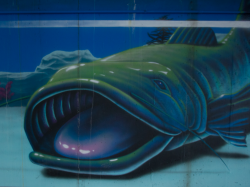 This is Leck's favorite fish. He has loved the idea of a giant catfish since he was young.

Hidden beneath Michigan Street, a new aquarium holds goldfish and koi that have grown to an inexplicably large size. They swim lazily through the seaweed and rocks of their riverbed environment as canal joggers and bikers hurry past the glass windows. At least that’s what it looks like at first glance. A closer inspection reveals that these fish are mere paint brought to life under the skilled hand of Indianapolis muralist Carl Leck, a specialist in 3-D illusion paintings. 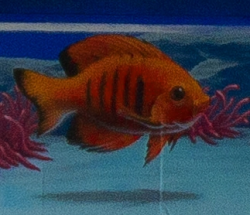 Originally, Leck planned for this fish to be Blinky the Three-Eyed Fish from the Simpsons show.

The White River Canal Aquaculture Preservation Aquarium is part of the 46 for XLVI mural project that brought artists from around the country to Indianapolis to enhance our urban landscape with art in preparation for the recent Super Bowl. Leck got involved with the project early and once he found out his mural site was on the canal, Leck knew he wanted to do something with fish. “I frequent the canal regularly,” explains Leck. “Every time I’d walk by the paddleboats especially, I could always count on seeing the goldfish in the water. It’s the one sort of thing I remember picking out from my experiences on the canal; looking for the fish.”

Working with the pre-existing lights, Leck decided early on to transform his wall into a gigantic, realistic aquarium, but originally the fish living in the aquarium were much less realistic. “When they asked us to come up with designs,” explains Leck, “they didn’t have any sort of parameters or guidelines at all. Which was awesome. That’s something I’m totally not used to, so I had more freedom than I was used to.” Initially, Leck was considering using his aquarium as an observation tank for fish that had been affected by run-off from the zoo upstream and become genetically mutated with zoo animals. There was an octopus with an elephant trunk and fish with antlers. “It would have been kind of terrifying,” says Leck. “I leaned away from it. Once I got one fish up I thought, ‘What am I doing? I just needed to paint fish. This is looking just fine just as fish.’” 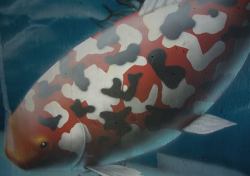 See the CBL? Leck signed his own koi.

After Leck sorted out his design, he had to tackle his wall. Cracked, rusty, and suffering water drainage issues from the street above, it took two solid weeks of prep and repair before Leck could even begin to paint. Once the painting did begin, new challenges arose working in the high traffic of canal users. “I had to hug the wall most of the time and try to keep my gear out of the way so people weren’t tripping over it,” he says. The joggers and the bikers, though, were the least of Leck’s worries—what he always watched out for were the inexperienced Segway riders. “They do Segway tours and there’d be a bunch of people on Segways zipping past me and for a lot of them it was their first time ever stepping foot on a Segway. As soon as they started rumbling past, I’d stop to make sure I was out of their way because I didn’t want to get run over.” 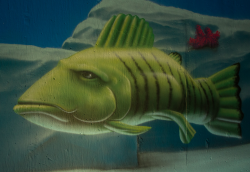 These green fish were originally drawn with antlers.

Despite a few close calls, Leck got along well with canal users and even made a few friends during the four weeks he spent painting his fish. “It was cool seeing the same faces all the time. I think that the people that saw it the whole way through appreciated it that much more.” And the people did appreciate it. Some of Leck’s favorite memories involved the drive-by encouragement he received while he was working. Joggers would run by and Leck would hear, “Looking good!” The Segway tour leader even shouted, “Yours is my favorite dude!” as he rolled by. Now that it’s finished, Leck simply hopes people will enjoy the mural. “It’s visual entertainment,” he says. “Hopefully I engage some people and they take something away from it. It’s there to appreciate.”

Where is the best place to view your mural? "Across the canal, at either corner. At those two points, it makes the most sense."
What was one of your biggest challenges? "Getting attacked by spiders. The grates would just be covered with spider webs, and I’d be up on a ladder trying to paint up there because I painted all this, even the black up there. Being up close with them, running a brush past their web, they would just drop down. I had pretty good sniper attacks from spiders."
Tweet
add a comment