To Indiana, With Love
by Natalie Atwell 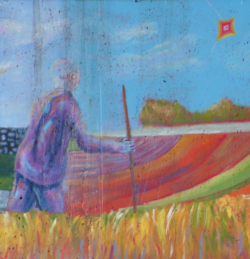 The spring kite acts as a guiding star for the wanderer who John admits is a self-portrait.

Summer days in Indiana are warm and carefree days meant to be enjoyed while doing something you love. Indianapolis artist John Domont along with his nephew Jordan Domont kept this for their philosophy as they worked long summer days painting Love Letter Indiana, a 112 foot long mural included in the Arts Council of Indianapolis’ 46 for XLVI mural project. Originally John was working alone, but as he began to realize the sheer size of the project John decided he could use some help and instantly thought of Jordan. “My nephew is a fabulous illustrator,” explains John, “and we’re very close.”

The DS on the barn door is the family crest of Domont and Sons, the soft drink business owned by Jordan's great-grandfather.

Moving from flying kites in the spring to lovers walking in winter moonlight, the Domonts worked to showcase the joy of living in Indiana through a landscape spanning the seasons. “We live here, we work here, we eat here, we play here, we love here,” says John. “This is our world and its basic but what more is there?” Flanked on either side of the mural are two deities. “I like the influence of celestial Asian cosmology,” explains John, “and I thought this mural should be guarded by the temple guards Fujin and Raijin who are thunder and lightning, the energies of rites of passage when you come into any holy place. And the flow of the landscape and nature itself is a holy place.” The Eastern gods Fujin and Raijin were eventually molded into the Midwestern piece as the Goddess of Spring and Old Man Winter, though John and Jordan were having troubles deciding what the figures should look like. Fortunately, Indiana continued to provide inspiration for the pair of artists. One day while they were painting, a kind old man walked past and began to chat with the men about their work. “And I looked at him,” says John, “and I said, ‘Jordan. It’s old man winter.’” Later, an inquisitive young girl stopped by the mural and she became the Goddess of Spring. 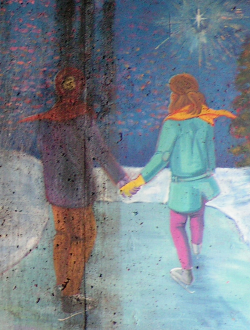 The river of life has flowed through the entire mural and completes it's cycle frozen in winter.

Now that it’s finished, the uncle and nephew duo hopes the joy and good boy energy they poured into the piece exudes back out for the viewer. “My intent was to bring the city into the country,” says John. He would like the viewer to slow down and remember the more leisurely pace of small town Indiana to truly engage the mural. “Have something to drink and take a stroll,” John suggests. “Have a sandwich. Sit down and enjoy it. You can certainly interact with it walking right by it, but on the opposite side of the canal, you can sit and kind of languish.”

John chose to paint the fall sun as the Native American symbol of the four directions in honor of the Eiteljorg Museum.

The people most impacted by the mural, though, were the artists themselves. The long days of painting and picnicking under the canal created a unique time for John and Jordan. “It was honestly the biggest bonding experience I’ve ever had with a family member before,” says Jordan. “I think it we had one of those things where we were both at a point in our lives where we could have fun with it and I think it came out in the painting. It was a really special time and I’ll never ever forget it.” After two weeks of work, the pair celebrated by pulling themselves into the canal. “It was a beautiful culmination for the two of us,” says Jordan. But these artists hope this piece won’t be the last they work on together. Jordan, for one, is confident he and his uncle will team up again. “We will,” he says. “Too much fun not to.”

Where is the best place to view the mural? Jordan: "Underneath the bridge so you’re not getting too much reflective light and right across from it. On the other side of the canal you’re gonna get the entire view of the mural."
What were some of the challenges? Jordan: "I think it’s tough when you work on a scale that large to have to get a real hold of it. The way that we had organized it I think made it flow so much easier. We kind of just attacked one panel every two days so we weren’t bouncing around the whole thing."
Tweet
add a comment