I was nervous. I had been to the pet store before and looked at all the fish swarming in the tanks set into the back wall. I had pointed and stared and debated which was the most lovely but I had never in my twenty-three years of life owned a fish. Aware of my inexperience, I brought veteran fish owner Nadia with me. We parked in the lot outside of PetSmart and she led me inside. We walked through the aisles first, picking through bowls and rocks and little plastic plants as Nadia explained what all we would need for our new fish. 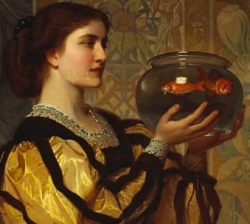 Goldfish are relatively hardy fish. If well cared for, they can live for more than ten years and grow to over eight inches long. The oldest goldfish according to Guinness book of World Records was a fish named Tish from Britain who lived to be 43 years old. The myth of short-lived goldfish is mostly due to inadequate care from uneducated fish keepers. A goldfish needs plenty of space to swim around and filtration because they are heavy producers of waste. This is why idyllic fish bowls are actually a poor home for goldfish and lead to shortened lifespans. 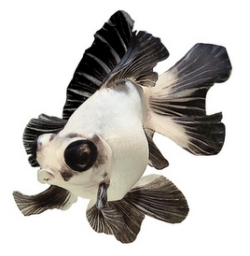 Panda Moor is one of many fancy varieties of goldfish.

Among fish enthusiasts, goldfish are popular pets not only for their beauty but also for their personality. Sometimes referred to as ‘aquapuppies’ among owner’s circles, goldfish are claimed to have endearing unique personalities and the ability to recognize their owners. Many studies show that despite popular knowledge, goldfish have long memories and exhibit intelligence. Jamie Hyneman of Discovery Channel’s MythBusters trained a set of goldfish to recognize color patterns and complete an obstacle course.

We compared fish flakes to fish pellets, grabbed a bottle of water conditioner and then the moment came. We ventured out of the narrow aisles and the wall of fish stretched endlessly before us. We walked past fancy guppies and small bala sharks and stood before the corner with the goldfish. There were so many kinds of goldfish. What was the difference between an Oranda and a Shubunkin? What was the difference between the 25˘ goldfish and the $25 goldfish? We pointed and stared and debated which was the most lovely but I was hesitant to decide. I knew I had to choose the perfect one to come home with us.

The Crucian Carp is a plain silver fish that is the ancestor to the goldfish.

The world has long loved and kept goldfish. Most likely the first domesticated fish in history, their roots can be traced back to the relatively plain Crucian Carp (carassius auratus) domesticated in ancient China for a food source. These carp were noted to occasionally produce red and yellow colored offspring as early as 300 AD. Intrigued by these more vibrant versions, the Chinese began separating those fish to keep in courtyard ponds among noble families. Over the next thousand years, goldfish keeping grew as a hobby and new varieties were available in a range of colors, some with protruding eyes or fancy double tails. By the Ming Dynasty nearly every Chinese home had a clay aquarium housing a beautiful goldfish.

Goldfish were introduced to Japan as high class pets around 1500. The Japanese quickly took up the hobby of breeding and held the first ever goldfish show in 1862. Goldfish reached Europe around the eighteenth century and then to the United States in the nineteenth. Today there are over 125 different kinds of goldfish from the common goldfish to fancy varieties such as the panda moor to more bizarre variations like the celestial eye. 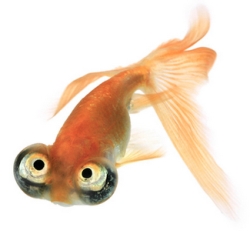 Finally, we found him. A feisty medium sized fantail goldfish, the most vibrant in the whole tank. We pointed him out to the helpful PetSmart associate who expertly scooped up the fish and tied him in a small plastic bag. Then he handed the bag to me and I got to hold my very first fish for the very first time.

Though most Hoosiers don’t know it, Indiana has an important relationship with goldfish. Our very own Martinsville is home to one of the largest and oldest goldfish hatcheries in America. In 1899, Eugene C. Shireman had a friend who sold washing powder for a chemical company that had recently come up with the idea of giving away goldfish to their premium customers. The gimmick was working so well, they had run out of goldfish. Shireman had recently inherited swampy farmland that was no good for growing crops and he quickly decided to transform the land into a goldfish farm, Grassyfork Fisheries. He began with two hundred fish and though the original chemical company went out of business, Shireman’s fish were in high demand for other selling campaigns. By 1934, Grassyfork produced more than seven million fish annually that sold in dime stores, department stores, florists and other obscure places. Thanks to Shiremnan, Martinsville was known during this time as The Goldfish Capitol of the World. The fishery was sold in 1970 to Ozarks Fisheries and is still operational today producing tens of millions of koi and goldfish every year sold in pet shops, at carnivals and to private hobbyists for personal aquariums and decorative ponds. 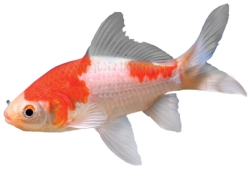 The comet goldfish is the only variety of goldfish the United States has contributed.

Many varieties of goldfish thrive very well in ponds. Goldfish can survive a wide range of temperatures, from 40°F -106°F with the ideal being around 70°F, though rapid changes in temperature will shock the fish. As long as there is a supply of oxygen, goldfish can survive in a pond that forms ice in the winter. They will slow down, settle at the bottom of the pond, and stop eating until it becomes warm again. Aside from being decorative, goldfish are often favored for ponds as they are great for mosquito control since they will feed on the insect eggs and larvae.

Nadia drove us home and I held the new fish on my lap. He was darting back and forth in his small space and his scales glowed bright orange every time we drove under a street lamp. He was a beautiful fish and now we had to give him a name. We tossed around Merengue, Salsa, Theodore, and Charles but none quite captured the personality of our fish. Then Nadia suggested one more name and we both knew it was right. We smiled and nodded and introduced the world to Senor Pesca.