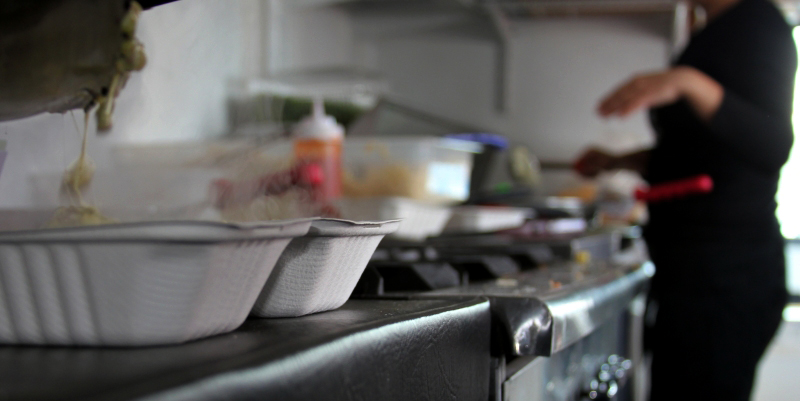 “I’m finding all sorts of things in this engine compartment, but none of them belong here,” laughs Bob as he peers into the gritty metal workings of the truck. “There’s even a piece of macaroni.” Theresa is bustling in the back, loading bins with cheese and chopping vegetables. She smirks at the comment. “That’s no surprise,” she says. “There’s macaroni everywhere.”

Theresa Johnson is co-owner of the Mac Genie, one of more than fifty food trucks to hit the Indianapolis streets in the last two years. “I’ve always wanted to own a restaurant but it’s expensive, quite frankly,” says Theresa. She watched the food truck trend growing and decided that was the way to go. Trucks may be cheaper, but they do come with their own unique problems. This morning the Mac Genie barely pulled up outside Triton Brewery before the engine stalled and died. “It’s never given us problems before,” says Theresa between phone calls trying to track down a mechanic. 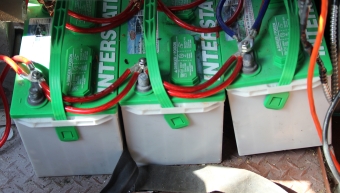 The Mac Genie's power bank is comprised of marine batteries and power converters.

Some food trucks operate on external generators but the Mac Genie is powered by a bank of marine batteries and power inverters that rely on the truck’s engine to stay charged. Without the engine running, there is a limited supply of electricity. Fortunately for the Triton lunch crowd, the propane-powered stove does not require electricity. So the truck will be able to operate well enough to serve food this afternoon but it won’t be able to get home.

It’s not long before the first customers amble up from the brewery. “Are you open for business?” they shout. Kim, the second woman on the truck today, slides open the window. “Of course! What can we get for you?” After staring at the menu board for a few moments, the men decide on a classic Genie Mac and a Buffalo Chicken Mac. Kim rings up their order on the iPad and assures them it will only take about five minutes as she hands back their change.

The Mac Genie menu offers a variety of unique macs on their menu but not much else. “Keeping it simple,” explains Adam, the other Mac Genie co-owner. “We think as a food truck you should do one thing and do it really well. Not necessarily one item, but one genre of thing.” It was Theresa who was sitting at a restaurant one day and realized that mac n’ cheese was the perfect genre for the food truck. “Everyone loves mac n’ cheese and pasta is like a blank slate,” she says. “You can dress it up anyway you want.” And they have. The Mac Genie is up to fourteen original recipes including some unique creations such as the Flaming Dill with pickles and cayenne pepper or the Hot Rueben made of monterey jack and swiss cheese with sauerkraut and corned beef topped with thousand island dressing and pumperknickel pretzel bits. They even have the Wee Mac Mac made with Sun King beer. 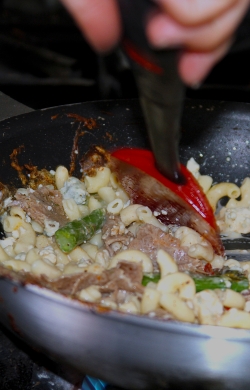 Theresa stirs up a Steakhouse with steak pieces, blue cheese, and asparagus.

Kim hands off the first orders to Theresa who is doing the cooking today. She lights the pilot on two of the six burners in the propane stovetop speckled with burnt pieces of cheese and pulls out a pair of skillets. Two scoops of pre-cooked macaroni and a handful of cheese goes into each pan along with some secret Genie Mac ingredients. The kitchen is designed for efficiency with food items and utensils placed within easy reaching distance of the chef standing at the stove and the cooking process is simplified to eliminate unnecessary extra steps. “An organized kitchen is a fast kitchen,” says Theresa who is dedicated to keeping wait times under five minutes for their customers. This philosophy was put to the test the first week the Mac Genie was open and they filled 600 orders in seven hours for the Super Bowl XLVI crowds. “It was exhausting, but we learned that we can handle crowds really well,” she says. The cheese in the skillets begins to sizzle and Theresa stirs the macs to keep everything melting evenly. She watches each pan closely and once everything has blended to her satisfaction, she pours them into containers to be garnished with breadcrumbs, green onions, sour cream, and bacon. “We call it stovetop mac,” she says.

Theresa hands the macs off to Kim for delivery and her phone rings again. It’s Adam and he has found a tow truck. “You told them we are a food truck, right?” asks Theresa. “They know we are a little heavier than your average truck?” The Mac Genie once was an average truck. It began life in 1994 as a Little Debbie truck and it passed through various phases of life, including some time at Ball State University, before it ended up sitting out behind Tillman’s Auto Sales with a flat tire and little hope of being used again. “It was completely plain,” says Adam. “The walls were wood and the floor was a crusty metal.” Theresa, though, saw the potential in it and snatched up the old truck for a good deal. Then the Mac Genie crew began searching out used kitchen equipment and trying to figure out how to piece everything together.

“The build was definitely one of the biggest challenges,” says Theresa. At fourteen feet by seven, the back area of the Mac Genie is one of the roomiest in Indy. Those 98 square feet hold one beverage cooler, a large food cooler/prep counter, a propane stovetop, a garnishing counter, deep basin sinks, propane tanks, and other pieces of small equipment like skillets and spatulas. It only takes three people working back there to feel crowded and the Mac Genie is a comparatively simple concept without the need for deep fryers or ovens. But not only does everything have to fit in the back of the truck, it needs to function and meet all the same health regulations as a traditional brick and mortar restaurant. “There is not a blueprint for a food truck out there,” says Theresa. “We had to figure out a lot of things as we went.” 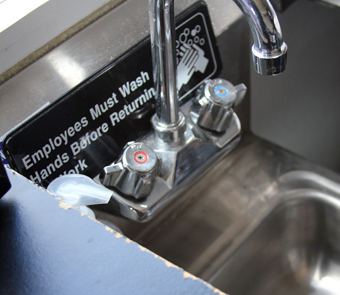 All food trucks must comply to the same health codes as a traditional restaurant.

The Mac Genie teamed up early on with Asylum Autowerks, who specializes in custom car upgrades but had never worked on a food truck before. “The guys at the Autowerks place deal with high power electric set-ups for people’s cars all the time and so they were all over that part,” says Adam, but the Mac Genie team had to figure out some of the other systems on their own. “Plumbing was complicated,” says Theresa. “We had three plumbers working on the truck between propane and water.” Through much research and a little trial and error, the Mac Genie was able to find solutions to all their challenges. “There’s many different ways you can do a construction project,” explains Adam. “It’s really up to you. There’s a health code, but there’s no building code when it comes to making a food truck. So if it works, it’s good to go.”

The trickle of customers has grown to a full flood in the last twenty minutes. The orders are coming in consistently and Theresa is working over as many as four burners. The smell of cheese is strong and inviting. The Mac Genie truck has received much warm praise from the people of Indianapolis and they are expecting a busy summer. Theresa, though, is realistic about the future of food trucks. “I do believe it’s a trend, but it’s the beginning of the trend,” she says. “We still have some time. Do I think there’ll be fifty trucks in the city ten years from now? Probably not. Either way, we’re prepared for it. We’re gonna be in the food business whether it’s on a truck or in a brick and mortar.”

For today, the Mac Genie has a tow truck scheduled to pick them up at four and they plan to keep serving until they are towed away. Even though the truck will be off the streets for a few days for repairs, Indy can rest assured the Mac Genie crew will keep us elbow-deep in mac n’ cheese for a long time to come.

What makes a successful food truck?

Adam says Persistence. And plan your customer’s experience from the time they order to the time they leave your truck. Have service standards for what you’re doing. I imagine there’s a lot of people especially seeing the success of food trucks recently that are just like, yea, I’m gonna make some money. That’s never something we wanted to do. We wanted to have something we were completely proud of and we thought was original.
Theresa says Resourcefulness. Everything was harder than we thought it would be during the build. How do we secure this stuff? Where do we run electrical? Then there are problems you don't expect while you're up and running. Sometimes our water gets glitchy and at first we didn't know what to do. Now we can fix it in about thrity seconds. It's just figuring stuff out.
Tweet
add a comment