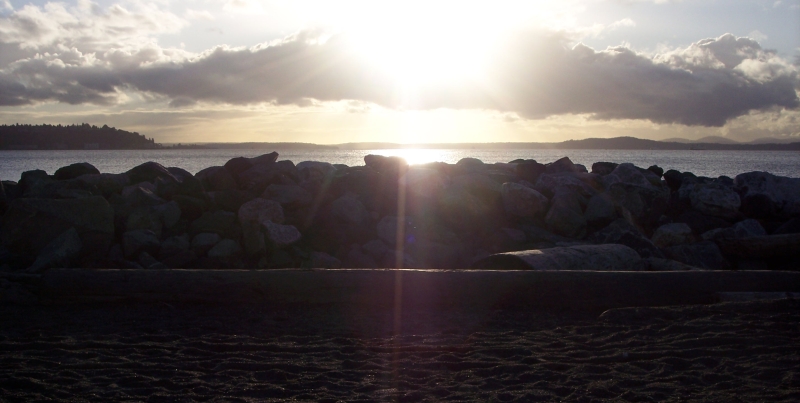 Quest for the Pacific
by Natalie Atwell

The Gulf of Mexico (Spanish: Golfo de México) is the ninth largest body of water in the world.

I was born in Indiana. I grew up in a small town you have never heard of unless you happen to specialize in knowing little towns that no one has ever heard of. We lived in an old Victorian house with chipping white paint that was approximately 473 miles from the ocean.

My family went to Disney World when I was 8 years old. While we were down there in Florida, my parents decided to take us the beach. I had never been to the beach before and I was excited to see my first ocean.

The Pacific Northwest is a region in western North America, bound by the Pacific Ocean.

When I was twenty, I decided to be a little more bold and spent 3 months in Prince George, British Columbia. I was approximately 1,500 miles west of the Mississippi.

During my stay in Canada, I took a trip down to Seattle to meet one of my Indiana friends for the weekend. I flew from the tiny airport in Prince George to the giant airport in Vancouver. I found the monorail from the airport to downtown Vancouver where I caught a bus to take me to Seattle.

The bus took I-5, which is an interstate that runs close to the coastline all the way from Vancouver to Seattle. During that four hour ride, I caught glimpses of the water whenever the road would rise high enough above the evergreens. I had never seen the Pacific Ocean before.

Seattle (pronounced /siː'ætɫ/) is the northernmost major city in the contiguous United States, and the largest city in the Pacific Northwest and in the state of Washington.

The bus stopped at the King Street Amtrak Station hidden behind Qwest Field where the Seahawks play. I stepped out into this new city with a backpack and a print-off from Google Maps.

We stayed at the Mediterranean Inn in area of town called the Seattle Center, which meant we were two blocks from the Space Needle, which is about a mile north of the central business district and downtown Seattle.

If you rode the elevator all the way up, you could get out onto the roof of the hotel. Seattle was stretched out in front of us. The Space Needle rose up to the sky. The tall glass buildings of downtown glinted at us in the morning light. And out ahead was an expanse of water. Huge cargo carriers and cruise ships and little ferry boats glided along the surface.

“You know, I’ve never touched the Pacific Ocean,” I said.

“Neither have I,” said Elisa.

And so we added that to our list of things to do in Seattle. Touch the Pacific Ocean.

Downtown Seattle averages 71 clear (sunny) days a year. Between October and May, Seattle is mostly or partly cloudy six out of every seven days.

We set out in the morning and it was a beautiful day. There were a few clouds in the sky but you could still see blue and feel the sun on your cheeks. We headed south to China Town. The water was always on our right. We could look over whenever there was a gap between the buildings and see it sparkle like a promise.

After our crepes in China Town, we decided it was time to find the Pacific Ocean. There was a place marked Waterfront Park on our Google Map and we figured that would be the place to go. We followed the streets and the water was coming closer and closer.

We kept walking towards the water until we found ourselves standing on top of it. We had found Waterfront Park and it was built on a pier above the water. We went to the edge of the railing and looked down. The water swirled around the rotting wood that held up the pier. Ten feet. Ten feet below us was what we sought.

The Seattle Aquarium is a public aquarium opened in 1977 and located on Pier 59 on the waterfront in Seattle, Washington, USA.

We decided to keep walking. Surely the pier ended eventually.

We walked and we passed shops, restaurants, carnivals, but the pier never ended. We walked past the Seattle Aquarium and they had little tanks set into the outside wall of their building filled with sea creatures. There were anemones and star fish and clown fish and all sorts of little reef fish.

We put our hands to the glass, but we were still half an inch away.

We chose the Space Needle as our one expensive touristy thing to do in Seattle. We paid our $18 and took the 43 second elevator ride to the top. This far above the city, you could see everything.

We chose this vantage point to strategize. We looked down and we could see all the places we had been. We saw the never-ending pier and traced it to its end, matching the streets below with lines on our map. It did not seem too far.

We were almost there. One more street to cross. But it wasn’t a street. There were train tracks with a twelve foot chain link fence on either side so no one could put themselves in danger from the trains passing through.

Through the links we could see the water. It was still there. Sparkling like an unkeepable promise.

Seattle is the birthplace of the rock music style known as "grunge.” Grunge lyrics are typically angst-filled, often addressing themes such as confinement and a desire for freedom.

The sun was setting. Our day was ending. There was only one thing left undone.

“Maybe we should just head back to the hotel.”

And then there it was. A beautiful bridge that went over the rail road tracks. On the other side was a walking trail along the water. There was a railing between it and the water. But we were closer.

We walked down that trail until we found it. A little beach. Covered in rocks and logs and seaweed, but the water was rolling over it.

So we sat on the rocks and watched the sun balancing on the horizon. Our hands were still wet from turning them in the tides.

“We have touched both oceans.”

“Our quest is complete.”

Elliott Bay is the body of water on which Seattle, Washington is located.