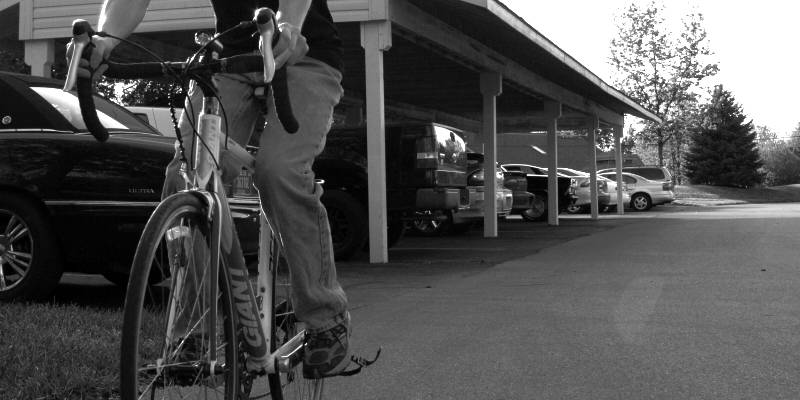 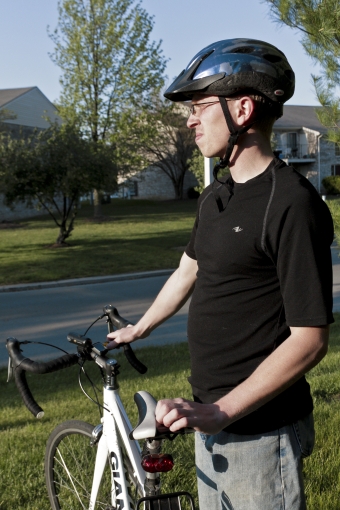 Derek is a country boy born and bred in a northern Indiana cornfield. He came to the big city in 2008 to study nursing at IUPUI and he brought his trusty mountain bike with him to ride to class. Back then he was among the early pioneers of downtown bike commuters when there was only one mile of ambiguous bike lanes somewhere on the Northside. “It’s a good feeling to do something not a lot of people are doing yet,” says Derek who has since graduated, moved to the Southside and takes advantage of the over 65 miles of on-street bikes lanes along with our trail systems to get to work, meet with friends, and take relaxing scenic rides in the afternoon. “It’s that freedom aspect,” Derek explains. “You can go wherever you want to go and see so many different things.” Some of his favorite bits of scenery to ride by are gas stations and the ever-growing numbers on their signs. “My monthly gas bill is maybe thirty dollars,” says Derek who stays healthy, wealthy and wise using his car only occasionally for grocery shopping and trips back north to his country roots. 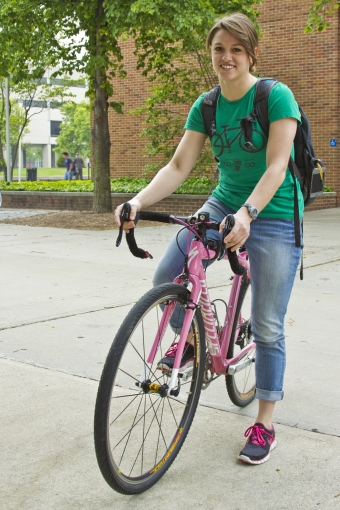 Anna walks out of her home in the morning, looks over her bikes, and has to decide which one to ride today. There is one for every occasion: a mountain bike for rough trailing, a road bike for speed on paved streets, and a cyclocross that has the best of both worlds and gives her flexibility to ride over all kinds of terrain. It’s Friday and that means she is going on an urban ride with some co-workers from Gray Goat Sports, a Greenwood bike shop, all the way from the shop to downtown. They take major streets, bike lanes, some alley ways and other shortcuts to get them where they want to go. She needs versatility today so she pulls out the hot pink cyclocross, her favorite commuting bike. Anna didn’t always own three bikes, though. It all started about six years ago during her undergrad at Indiana University. “I started out doing little 50, which is the running version of little 5. It was ok, but I wanted to do the actual 500 bike race. Just riding in Bloomington is awesome. They have nationally known routes and stuff and that really piqued my interest in the sport.” These days, Anna rides all three of her bikes regularly but she is most looking forward to her next cyclocross race where riders take on a challenging course featuring everything from pavement to grass to wooded trails. “Biking is awesome,” she says. “Everyone should own a bike and ride a bike.” 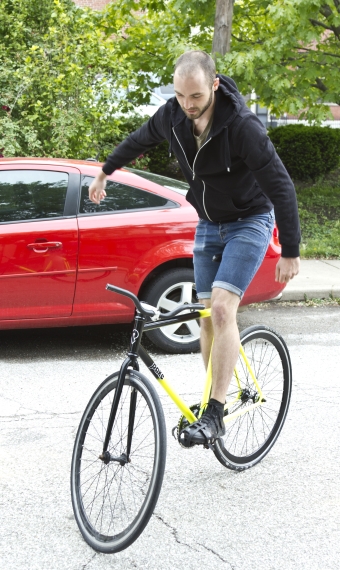 Fast. Freaky Fast if the Jimmy John’s marketing is to be believed. That describes Israel and all the other delivery bikers that make up an underground biker’s culture all their own. They ride lightweight track bikes with skinny tires and only one gear for maximum pedaling efficiency to get you your sandwich in record time. Off the clock, these bikers meet up to hang out for group rides around the city or to compete in unofficial street races called Alley Cats. “For us, being out on the road is just a way of life,” says Israel who got a job at Jimmy John’s and joined the culture about six months ago. Now he rides anywhere from five to twenty-five miles a day within a three mile radius to deliver sandwiches across downtown. “I finally feel like I understand what some people go to college for,” he says. “They go to school because they want to do something for their lives that they love doing. To finally actually have a job where you wake up every morning and say ‘Thank God I have to work today.’ It’s just exciting. On your days off, you’re just like, ‘Aw man, what am I going to do? You know what, I’m gonna go ride some more.’”