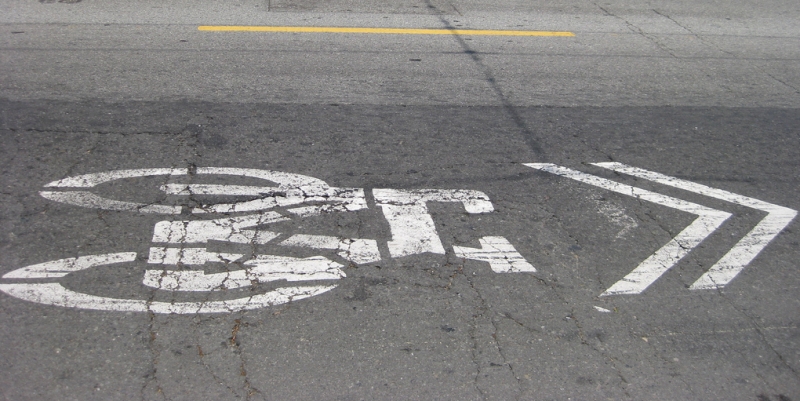 So you want to be a commuter
by Natalie Atwell

You are no longer content to be a casual cyclist. Gone are the days where your bike rusts and gathers dust in the garage only to see the sun on a few rare summer days for short cruises down the Monon. You are ready to put that bike to good use and let the car be the one to gather dust in the garage for a while. You want your bike to be your primary transportation to work, to the store, for Friday Pub Night, and all the other errands of life. You canĺt wait to turn in the extra pounds and extra stress to get extra cash in your wallet and a better planet to boot. Go you.

This is our quick guide to help you get started on your new awesome lifestyle.

What to Ride: You can ride just about any bike you like. For more info about choosing a bike, see our informative article. In general, to use your bike as your primary means of transport in a city setting, you will want something with a sturdy frame, thinner tires, and capable of carrying some weight. Some companies make a bike they call commuter style, but cyclocross, touring, or city style bikes will have good qualities for urban cycling life.

How to Accessorize: By law in Indianapolis, all bikes are required to have lights, a bell, and brakes. Do yourself a favor, avoid a ticket, and make sure your bike has these bits first. Beyond those, nothing else is necessary, but a lot of things are fun. There are so many cool gadgets you can get for your bike; everything from high tech computer trackers to hipster bike baskets. Itĺs really all a personality preference thing so have some fun and make your bike your own.

For the commuter, we recommend above all a rack and some panniers (thatĺs a fancy word for bike bags). You can pick up racks that will attach traditionally to the rear of the bike though there are front racks for sure. These racks give you a surface to fasten different kinds of bags and baskets, which allows you to carry stuff on your bike. Toss in some extra clothes for work, a briefcase full of papers, some groceries, or even library books. We love our panniers and we think you will, too.

We also think you would like to have fenders if you plan to ride anywhere it might rain or there would be puddles. Fenders keep water from spraying you while you are riding so you can keep your pants dry and avoid looking quite silly.

According to the Insurance Institute for Highway Safety, the typical bicyclist killed on the road would be a sober male over 16 not wearing a helmet riding on a major road between intersections in an urban area on a summer evening when hit by a car.

What to wear: A helmet. Always wear a helmet. We could throw lots of statistics out at you about how awesome helmets are, (like how helmets are estimated to reduce head injury risk by 85% or how 91% of people who die in bicycle accidents are not wearing helmets) but the big question is how much to do you love your brain and your current cognitive ability? Are you really willing to risk that on the driving ability or the inattentiveness of the people operating vehicles around you? Because it doesnĺt matter how great a cyclist you are. There are always things outside of your control.

Elsewise, you can wear anything you like on a bicycle. Now we know that some of you have been led astray and believe that spandex is required to ride a bicycle but this is blatantly untrue. (Though of course you can wear it if that is your preference) We recommend wearing something comfortable, preferably brightly colored for visibility. For longer trips, you will want to wear something that can help regulate your body temperature according to the weather and rain gear may not be a bad idea. Closed toed shoes are also a good idea for safety reasons.

How to Ride in the City: We are aware that this is typically the intimidating part of becoming an urban cyclist. Riding close to cars and negotiating traffic can be stressful and scary, particularly as both cyclists and motorists are unused to interacting together. Let us encourage you to take a cautious step forward and give it a try.

How bikes should interact with cars:

According to Indiana law, bicycles share all the same rights and responsibilities as a motor vehicle. Though it is not illegal here to ride on the sidewalk, it is generally much safer for a bike to be on the road. Bicycles are required to follow all rules of the road including stopping at lights and signs and to never ride against the flow of traffic. Like other slow moving vehicles, bikes ride to the right and faster moving vehicles are expected to respect the bikes and pass them kindly if needed. Indianapolis has a three-foot passing law meaning that cars must leave at minimum three feet of space when going around a bicycle.

How cars should interact with bikes:

The city has put in plenty of bike lanes and these are designated lanes on the road for the bicycle. They are on the right where a bicycle would typically ride anyway and have solid lines on either side, which, as in other traffic scenarios, means cars are not allowed to cross into that lane. Occasionally, most often at a turn lane, the lines will be dotted and cars are allowed to cross the lane while yielding to cyclists. Many of these sections where bike and car lanes cross have been marked with green paint and are called green lanes. Motorists and cyclists should use extra caution when entering a green lane. Also painted on the roads, you will see sharrows. These are the image of a bike with chevrons underneath painted on a car lane where there is expected to be bike traffic. Cars should adjust accordingly and be prepared to share the road.

The most important thing when riding on the road is to be predictable. This means riding in straight lines, obeying traffic laws, and signaling turns. Erratic cyclists make everyone nervous and are more likely to cause a wreck. No one is above the law. Why are you so important that you can be allowed to endanger everyone elseĺs life?

Planning your Route: As you ride, you may realize that the route you take in your car isnĺt always the best route for a bike. While bikes are allowed on any road, it is best to seek out roads with present bike infrastructure such as bike lanes or streets with lower car traffic. (For bike lanes, check out our awesome map!) You may be surprised how much faster and more stress-free your ride will be if you simply go two streets over to a lower traffic road. Donĺt be afraid to try a few different options to find what way you prefer and know your route before you go. If you are nervous to hit the streets alone, ask a friend to go with you. There are probably more than a few of your neighbors who cycle regularly and would be happy to help you learn the roads.

Well there you go! Now just get out and ride.

For further reading, we highly recommend The Urban Cyclist's Survival Guide by James Rubin and Scott Rowan. Available at the Central Public Library. Or at least it will be as soon as we return itů