Welcome back Bathroom Fans! It is the middle week of our countdown and today we reveal the #5, #4, and #3 Brewery Bathrooms of Indianapolis.

Missed Part One? Catch up here.

It’s all in the details for Scott Wise who has traveled the United States over, snagging bits and pieces from top restaurants, rolling all he’s envisioned and discovered into his own restaurants and brew houses—including Broad Ripple’s Thr3e Wisemen Brewing Co.

Thr3e Wisemen’s interior could be described as “ski lodge meets sports bar,” and that carries through to the bathrooms, as well. With more capacity than most taprooms in Indy, Thr3e Wisemen’s ladies’ room boasts three stalls and a baby changing station. Wise’s choice of knotty pine delivers the feeling of being in an Aspen ski lodge with a “modern twist” produced by a Dyson Airblade hand dryer and hands-free soap and water dispensing. Contemporary mirrors with inset lighting create intriguing lines of symmetry; just don’t let your beer get warm spending too much time in this loo! 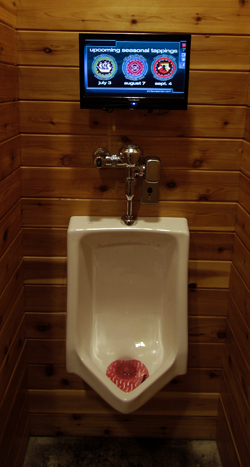 Every aspect from the tableside salad service to the manner in which customers wash and dry their hands in the restrooms has received thoughtful consideration from Wise and his team. “As crazy as it sounds, we teach our staff that our customers view the cleanliness of our restaurant from how your bathroom looks,” Wise explained. “The restroom is a place where you could cut corners, but I was raised not to do things half-assed. Going to the restroom is a part of life. I’ve got a restaurant that serves a lot of beer and the restroom is part of the experience.”

One attribute of a Thr3e Wisemen bathroom you’d have to travel to the Windy City to see is the small flat screen television in each stall and above every urinal. Wise has taken the bulletin boards of other brewery bathrooms and turned them high tech.

What’s popular at Thr3e Wisemen may change – space-aged hand dryers and in-stall advertising to the beers and interior touches – but Wise’s dedication to providing a unique, top-notch visit will likely never go out of style. 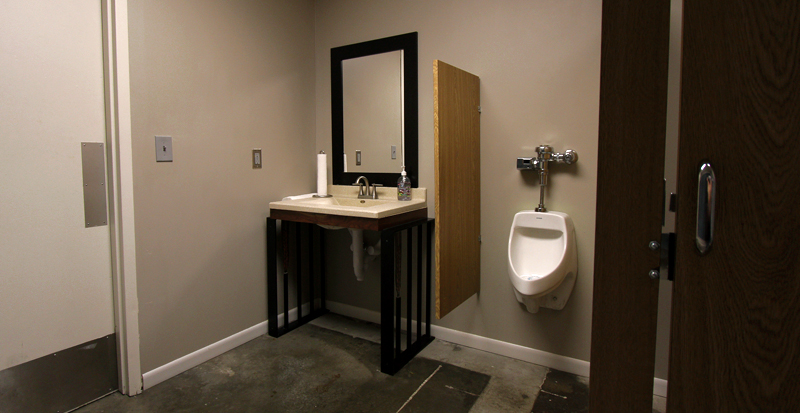 #4 Fountain Square BreweryIf you walk into the Fountain Square Brewing Company bathrooms and think they look like they were put together in a hurry, that’s because they were. The majority of the construction at the brewery was hand-done by the three co-owners and that includes the bathrooms. Thanks to some late-arriving materials, the guys were up at 10pm the day before the brewery’s grand opening last December trying to finish the bathrooms in time. Overall, we’d have to say they did a good job and they were quite creative. Since Fountain Square was opening about the same time Alcatraz Brewing was closing at Circle Center, they bought up a lot of used pieces including some wheat décor railing. If you look closely, you will start to notice it everywhere at the Brewery. In the bathrooms, the railings hold up the sink. Out front, the railings line the walls. But most interestingly, the bathrooms extend out into the tasting room. If you look at the low tables by the couches, you will notice that they stand on the wheat railings and the table tops are actually leftover bathroom stall partitions. Waste not, want not must be the motto in Fountain Square. 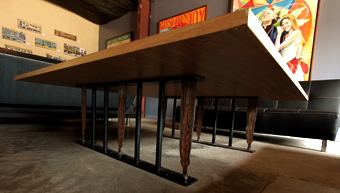 The most interesting bathroom attraction by far, though, is the chalkboards that take up an entire wall in each bathroom, complete with chalk. “When people are drinking, they often feel artistic,” says Sam, a co-owner and manager of the Tasting Room. The owners wanted to encourage that creativity as well as provide an opportunity for feedback and they have had plenty of interesting things show up on their chalkboards. Everything from crude messaging to highly skilled drawings to anime sketches. The boards get cleaned off every night, though, so hit up the tasting room often to see the latest artwork. 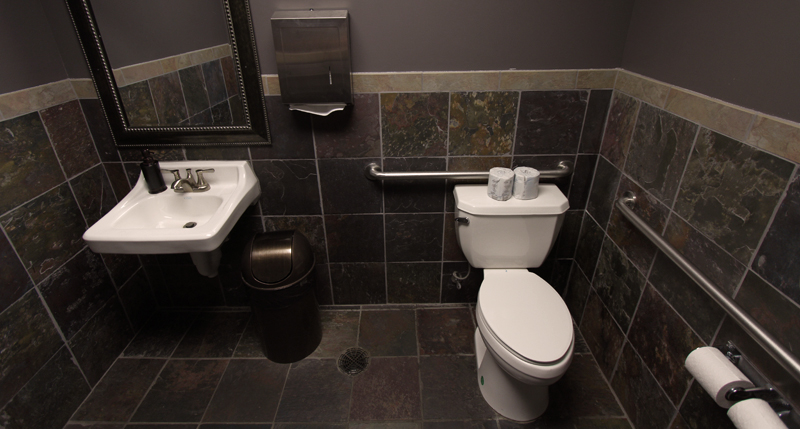 #3 Triton Brewing CompanyMuted mauve paint draws out the undertones in the marbled slate reaching up the walls and sets a soothing tone in Triton Brewing Company’s classy commode. With bronze accessories and a lovely gilded mirror, you might not believe you stepped into a brewery bathroom. “We didn’t want it to be your average bathroom,” says co-founder David who is well aware that most taproom bathrooms are little more than a “toilet in a closet.” This above-average bathroom fits in well with the rough, industrial style of the rest of the brewery that features exposed brick and ductwork. 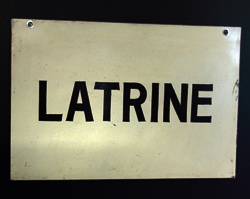 The three co-founders of Triton worked together to gut, design, and rebuild the majority of the building themselves, including the bathrooms. They had their work cut out for them since rumor was the space hadn’t been cleaned out in a couple decades. Originally the building was constructed as a mule barn in 1924. Later it became a main building at Fort Benjamin Harrison and then many things besides. Wanting to keep some of that vintage charm, the founding trio made sure to keep many of the interesting pieces from the original structure including a latrine sign from the way back in the day that now adorns the employee restroom. You can also look up in the rafters for original Sect 3 and Sect 4 signs. There are many hidden treasures at Triton, but we recommend above all the bathrooms.

Ready to find out who is Number One? Find out here.