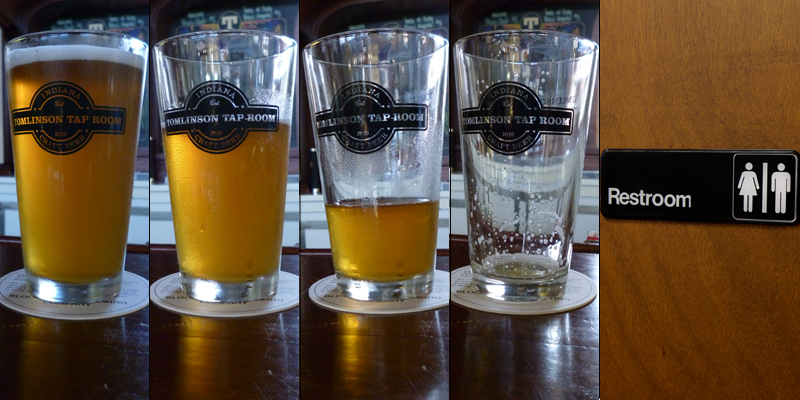 And here it is! The grand reveal. We proudly present to you the top two brewery bathrooms of Indianapolis.

Just tuning in? Catch up here. 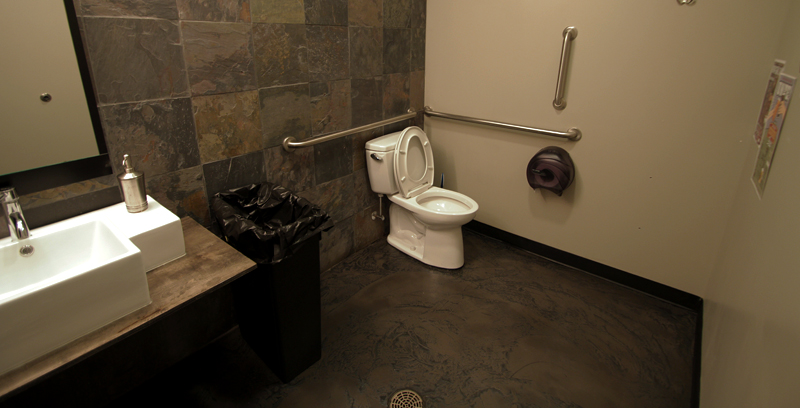 Just five months after its opening, Irvington’s Black Acre Brewing has become one of the area’s hippest late-night destinations. That’s thanks in part to its home brews, expansive list of guest taps and flavorful small plates. Not to be overlooked, however, is the smooth and trendy, yet rustic lounge vibe Black Acre’s owners Justin Miller and Steve Ruby dreamt up with the help of local contractors and designers.

“We wanted to keep things small with a pre-prohibition style and feel,” says Miller. “We went for a blend of coffeehouse and modern pub-style.” That atmosphere carries straight on into the restroom facilities that, though hinting at dark and brooding, create a sophisticated and restful experience. 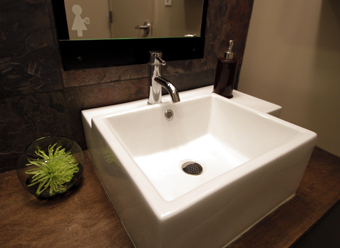 Black Acre provides one stall for men and one for women, finished with a mixture of natural elements that flow from the dining and bar areas. Metal accents and slate in grays, whites and browns keeps the neutral, earthy mood intact. Modern sinks and a purse hook for the ladies are other highlighted features in the bathrooms, as well as fresh flowers from George Thomas Florist just across the street. On this particular day, a bright yellow sunflower floats in a small, glass bowl. “I don’t think there are any for the guys,” Miller said as he tucks the bowl back into its place beside the ladies’ sink.

Missing from the bathrooms, though, are some of the interesting wood accents found in the main restaurant. For example, the wood lining the main room’s ceiling is formed of old pallets Miller and his four partners found on Craigslist. A standing bar is the center beam of a barn that once stood in Kokomo.

Recognizing things at Black Acre will continue to evolve, Ruby and Miller believe their intimate and personal, no-television policy is a standard that will draw Irvington’s own as well as visitors and across-towners as well.

Or maybe it’s just the bathrooms.

“I get a lot of comments about the bathrooms,” said Miller, “probably more than anything else. Mostly it’s girls who say, ‘For a taproom, you don’t expect that kind of bathroom.’” 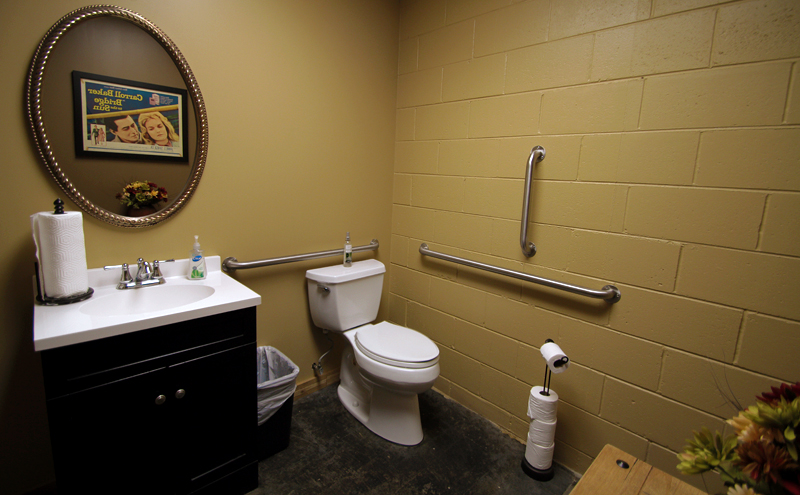 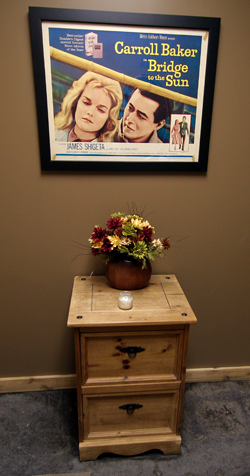 Tucked away on east 65th Street, Bier Brewery and Taproom is a like a home away from home with big comfy couches and a large screen TV waiting for you to sit back and sip on some beer. Official Greeter Obi will come right up and maybe even give you a lick as you walk in the door when the large, friendly black ball of fur is on duty. He will lead you back to the ever-rotating taps of fresh beer where you can pick up a growler or try sample after sample of the week’s selection. To your right, though, are two doors cleverly labeled Stouts and Blondes that lead into a place very close to co-owner Jerry Connor’s heart.

“Anyone who works here will tell you that the bathrooms are a bit of a pet peeve of mine,” says Jerry who has very high standards for the cleanliness of the bathrooms. And we must say, we’ve noticed. The bathroom is always sparkling clean and unique décor like the vintage oval mirrors and classic movie posters give these old water closets some personality. We were also charmed by the lovely flower arrangement on the distressed dresser in the ladies’ room. The majority of decorator’s credit goes to Jerry himself with extra points for resourcefulness as most of the pieces came out of his own attic. With such a cozy atmosphere, you may never want to leave this Taproom but fortunately for you, there will always be plenty of beer and hospitality for you as long as you stay.

Thank you for reading along with our Brewery Bathroom Guide. We hope you had as much fun reading it as we did writing it. This project is important because as you may suspect, standards for the bathroom say a lot about standards for the brewery.