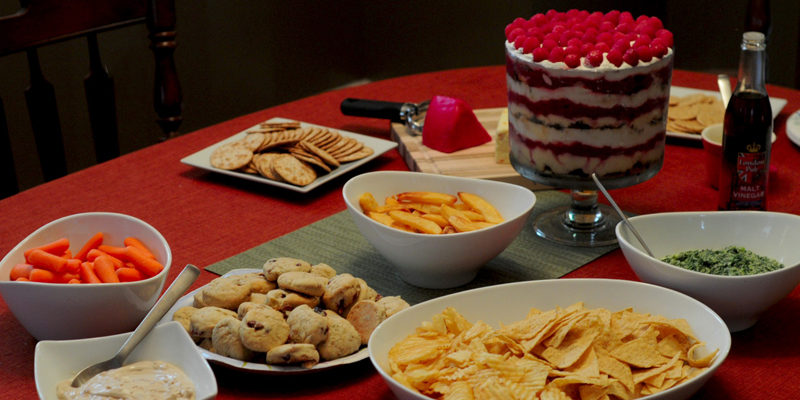 How to Throw
an Olympic Wine Party
by Natalie Atwell 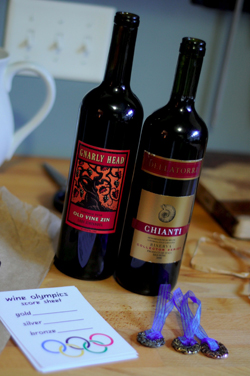 That time has come again to stop our lives and watch highly trained gymnasts, swimmers, and badminton players put their years of training to the test as they compete for the right to call themselves the best in the world. It only happens once every four years and after the spectacle London put on with parachuting queens and 100 foot tall Voldemorts to start it off, don’t you feel like a party? We thought you might and so this week we have a guide to show you how to throw an Olympic Wine Party to wow you and all your friends this Olympic season. Special thanks and original idea credits go to our good friend Amy. Thanks Amy!

Step One: Assign each Guest a Country The idea of the Wine Olympic Party is to determine which country has the best wine by placing carefully selected representatives against one another in a blind taste test. Once you have solidified your guest list, assign each guest one country and it is then their job to bring a wine for their country. For our party, we wanted to keep everyone on an even playing field and so we were looking for the best of the least. Each bottle had to cost less than $10. 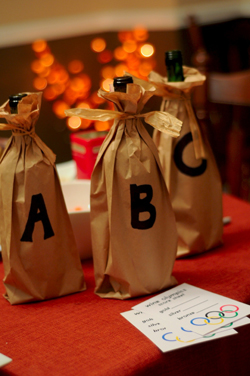 Step Two: Prepare Themed Snacks and Decorations In honor of the 2012 host country, we kept a British theme for our party. We had British chips with malt vinegar, assorted British cheeses and a nice big plate of scones. It is always fun to have a cultural theme, but you could have a more general Olympic theme. A good way to accomplish this is to have round shaped food like donuts or onion rings.

Step Three: Conduct the Competition Gather the competitors as your guests arrive and give each guest a scorecard. Once all the wines have taken their places, cover them and assign them a number or letter. We put ours in paper sacks closed with ribbons. Throughout the party, your guests become judges and will sample each wine. Then they will rank their gold, silver and bronze medal finalists on their score cards. You can provide entertainment during this mingling time with other games or by simply leaving the Olympic broadcast up on the TV for the evening. No one can take their eyes off those Olympic trampoliners. 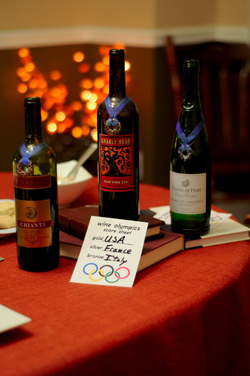 Step Four: Announce the Winners Once all the judges have submitted their scorecards, a neutral party will tally the votes. Three points for a gold designation, two points for a silver and one for a bronze. The wines will be unveiled, the winners announced, and medals awarded. Try not tear up here. We know it is very emotional.

And there you have it! A lovely Olympic Wine Party that will be the talk among your social circles for a long time to come. Happy Tastings!

Check out our Facebook Page for more party photos and to tell us how your Olympic Party turned out.