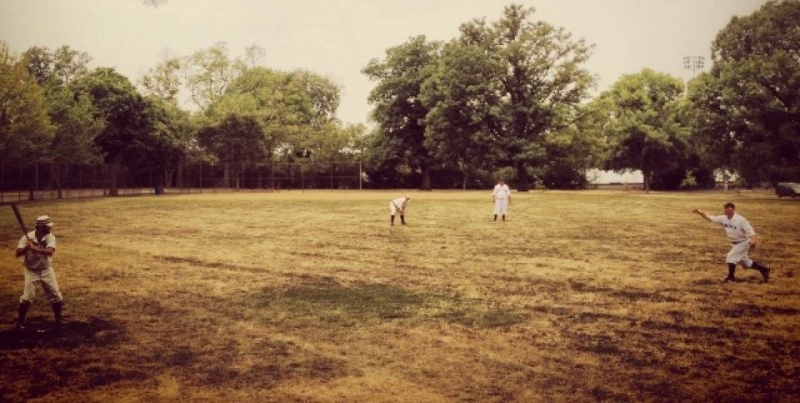 So long, London 2012. Iĺm already a little bit sad that the routine events of my evenings will no longer be underscored by Rowdy Gaines or Bob Costas filling me in with the highlights of the dayĺs events. Someday, Iĺm going to see at least one Olympic event in person!

What moment was your favorite of the 2012 Summer Olympic Games?

Though I was the kid in second-grade gym class who needed help overcoming serious anxiety even attempting to float in the poolĺs shallow end, swimming is far and away my favorite sport of the summer Olympics. Watching Michael Phelps power and slice through the waters left me speechless and inspired; something Iĺll never forget. What a joy it has been to witness him become the greatest Olympian ever!

Whether itĺs the pool, the track, the gymnastics floor or the sands of a beach volleyball court that attracted your eyes this summer, one sport you didnĺt see or might not have noticed as MIA was baseball. And softball, for that matter.

The two competitions were eliminated from both the 2012 London and 2016 Rio de Janeiro games back in 2005 by the voters of the International Olympic Committee, becoming the first sports to be dropped since polo in 1936. 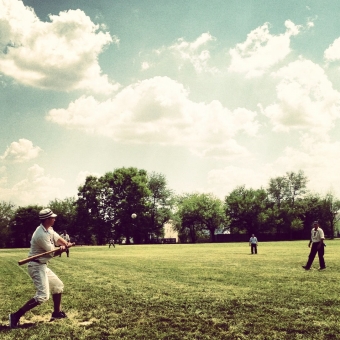 Many have been the reported reasons for cutting Americaĺs favorite pastime from Olympic medal contention, but baseball is alive and well here in the Circle City. According to the teamĺs official Web site, the Indianapolis Indians hosted 580,082 fans at Victory Field during the 71-game 2011 season. That was up from about 569,000 during the prior year.

You may be one of those die-hard Indians fans enthusiastically making your way to as many games as youĺre able. You may have even felt the olĺ blood pressure rise a bit at the news of baseballĺs exclusion from the Olympics. But have you heard of a baseball team that calls an open field at Garfield Park home? A team who plays by 1867 base ball rules, dons crisp white uniforms from that era and foregoes the use of mitts per those old-timey rules?

Theyĺre called the Indianapolis Hoosiers, reformed from a mid-19th century model roughly seven years ago with the help of the Indiana Historical Society. Though you may wonder if theyĺre possibly stuck in the past upon first glance, these guys are concerned with playing the game at a level of skill and respect that combine the most important elements of any athletic endeavor.

The Hoosiers, according to team spokesperson and veteran player Jim Walker, were originally an American Association professional team that existed in 1884. Three years later, the team reorganized itself through a new affiliation with the National League, a move that lasted through 1889. More than a century later, there exists the Vintage Base Ball Association of which the Hoosiers are not an officially recognized member team. However, the Hoosiers do play affiliated teams regularly throughout their season, which runs from April to October.

Home games are few and far between for the Hoosiers, but on an early Sunday in July at Garfield Park, passersby were treated to a competitive yet friendly double-header between the home team and the Lumbermen of Batesville. While team members warmed up on the field and attempted to seek a bit of shade before the first pitch under a nearby stand of trees, family and friends went to work unveiling a feast atop picnic tables nestled in between sets of wooden bleachers.

ôThey try and keep it as much as they can to the period,ö one young woman told me as she went about the task of feeding the hungry players. ôThey even have old-timey names. The guys on the team, I donĺt even know their real names.ö

Using clever nicknames ľ of course earned by various feats performed both on and off the field ľ is just one aspect of paying homage to the way base ball team used to be played, explained Walker, who goes by either Mountain or Honey, depending on whoĺs doing the talking.

Bags are used to designate bases and the baseballs themselves are larger than their modern counterparts, hard wound, handmade to period specifications of yarn, leather and wood or cork. Bats are crafted from wood and the uniforms are handmade for the Hoosiers, largely funded through the Indiana Historical Society and based upon black and white photographs the society unearthed during research, said team member Jordan Updike.

An avid base ball fan and second-season member of the Hoosiers, Updike was the teamĺs best cheerleader on this particular Sunday. During a game in association with Cincinnatiĺs Queen City Festival the previous weekend, Updike slid into home base, er, bag, and sustained a nasty sprain complete with black and blue bruising. The injury would sideline him for at least a month. As the runs poured in for both the Hoosiers and the Lumbermen, Updike explained the draw to a vintage ball team as opposed to joining a team associated with workplace leagues was simply a matter of nostalgia. 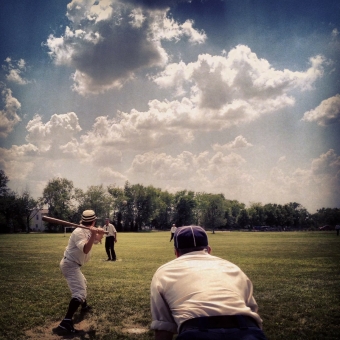 ôWhat I love most about it is that itĺs accessible,ö says Updike. ôYouĺve got 25-year-old kids playing next to a 60-year-old guy. Itĺs also great because itĺs less about athletics and more about your ability to hit and catch, to place the ball right where you want it. If you can do that, youĺre better than someone who can slam it. Come on Highball!ö Updike hollered at a teammate, turning his attention back to the play at hand.

Updike is right. Thereĺs a graceful finesse to this game despite the sweaty, ruggedness required of cracking the ball with all oneĺs might, cranking it around the bases and catching the base ball without a mitt.

ôItĺs like a Civil War re-enactment, but more fun,ö said Derreck Ramsey, 25, who admits the absence of a soft mitt to support each catch is the gameĺs toughest aspect, one thatĺs learned over time and can give a player an edge over his competition. ôItĺs the great equalizer. No matter how athletic you are, how fast. Itĺs all about that experience. You have to learn how to not hurt yourself so you can go to work the next day.ö

Fully ensconced in the aura of all things vintage, players and fans ľ called cranks in vintage base ball vocabulary ľ alike were joined by a group of city youth who arrived on the scene and set up a small party in the picnic area just behind the base ball field. Their party food and gear assembled, there was only one thing left to add. Because whatĺs a party without good music? ôTootsie Rollö by 69 Boyz came blaring out across the field, reminding everyone that, well, itĺs not 1867 after all.

Despite the exclusion of base ball from the Olympics this year and four years down the road, vintage base ball players such as Ramsey donĺt foresee the sport dropping off the world sporting scene anytime soon. Like all sports, it changes with the times and personalities who lend their talents to the call of the game. For those who pay attention to these changing tides, there are delights that can transport anyone involved back to a simpler time.

ôIĺve been playing since I was five, and playing vintage, itĺs like barnstorming again. Itĺs really kind of changing the game,ö said Ramsey of the exhibition-like nature of vintage base ball. This summer alone the Hoosiers were scheduled to play seven sets of games as part of various festivals, such as the one in Cincinnati where their style of play would be a centerpiece.

As another underhand pitch flew past the bag at home and Updike rests his ankle gingerly on the wooden bleacher in front of him. ô[Vintage base ball] attracts a certain personality,ö he observes. ôItĺs people who love the game. Thereĺs nothing else I would rather be doing right now.ö

Want to learn more about the team? Check out their website. 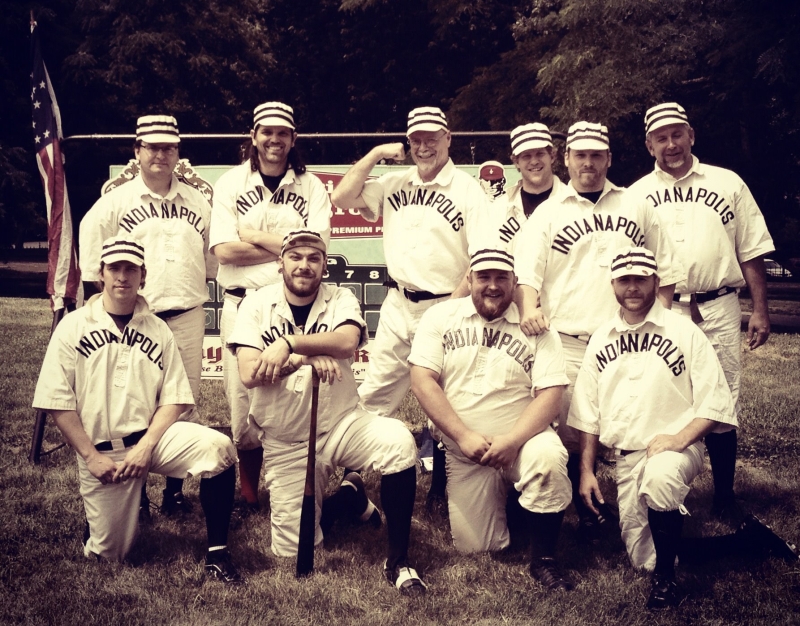