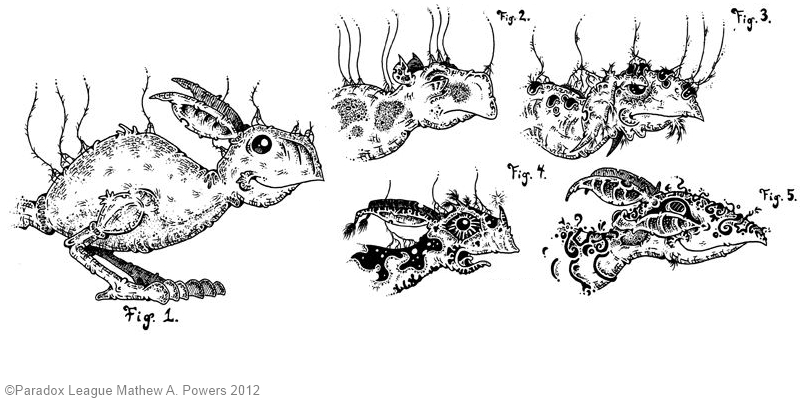 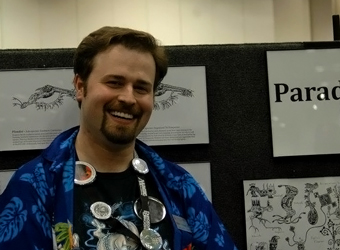 Mat Powers welcomes you to the Paradox League.

For most geeks, the journey to Gen Con begins a few weeks or months before the show begins. Some who are truly ahead of the game begin making plans for the convention a year ahead of time. Indianapolis resident Mathew Powers started preparing when he was in middle school. “I started drawing creatures in fifth grade, and by the end of high school, I started doing my first book. Here I am over a decade later, I’ve got almost 5,000 creatures.” He’s not exaggerating. A thick tome sits on his desk, the nearly-complete fifth volume of his lifelong project: the Paradox League. At Gen Con this year, he displayed a small collection of those unique creatures, neatly sketched in black and white and arranged on a board in the Artist’s Alley of the Exhibit Hall.

Back at Powers’ office, he sits in a shrine to the surreal, a cathedral of the exotic. Every available space is filled with some sort of creature memorabilia, from the most bizarre creatures ever imagined in fiction to the even more baffling animals of the real world. A Pokémon figurine sits on the desk next to a portrait of Powers’ wife and a very ominous looking skull glares down on me from the filing cabinet. In his years in the Media Arts and Science department at IUPUI, the lecturer and gaming advocate has gathered a massive collection. He leans over a stack of sketchbooks as he talks about his goal to make the ultimate compendium of fantastic creatures.

“I’ve always seen these creatures and these things in my head, and I’ve always wanted to show people things that they’ve never seen before. The Paradox League is about a galaxy on the edge of the universe, on the edge of reality. My creatures are a paradox in their very existence, and I want to do a field guide to show everybody as many strange things as I possibly can.” So far, so good. In the five books he’s worked in since high school he’s sketched 4,368 creatures; his goal is 15,000. And they’re not just drawn. “I want to have every creature documented in some way. Maybe it’s just a line from a book, maybe it’s a subspecies. You can’t just show one white guy and say, ‘that’s humanity.’ You have to show women, men, short, fat, thin, tall. I’m trying to expand upon every creature as much as I possibly can.” 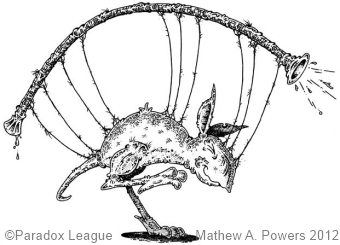 Powers displayed some of this diversity at his booth at Gen Con 2012. A creature called a Plonder - looking much like a fleshy boomerang with fronds and tentacles - appeared in six very different forms. Signing up for the Paradox League e-mail newsletter rewards you with a picture of a different “Plonder to make you Wonder.” On the Paradox League website, visitors are welcomed by a Zamahastryian, which is reminiscent of a wizard. If, that is, a wizard had a face like a spider and shoes like a palace jester. Though some of his creatures are slightly grotesque, you can’t help feeling drawn to them.

The website, launching late next month, will be focused on displaying the diversity of his creatures and some of the information he’s invented about them. Database information about each creature, videos of Powers describing their lifestyles, and images of the creatures interacting with their environment will fill a massive website at ParadoxLeague.com. “It’s a performance piece. I have a scientific approach and a narrative approach. I want to tell the history, the ecology, the evolution. I love nature films. I want this to be a similar experience.” In his limited free time, Powers draws the creatures on old paper, does minor touch-ups in Photoshop, then writes the history and biology of each creature.

His former students Colin Orr, Aaron Gallimore, Dean Verleger, and Bianca Garfias have been helping with the website and videos, but for Powers, it’s still deeply personal. Since the beginning, he says, “it’s just been sort of a parlor trick. The people who see it always tell me, ‘you should put that out there,’ but my wife Allison is really the tectonic activity behind what I’m doing. And I’d like to leave a legacy for my daughter.” As an instructor at IUPUI, he also feels a particular duty to the students he teaches. “I always tell the kids here how to be successful, and I don’t want to be a hypocrite when they ask ‘Well, did you do it?’” 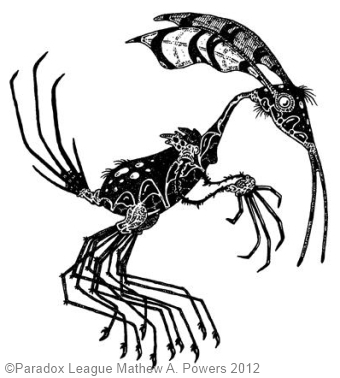 Even the sense of diversity that permeates the project stems from his own personal experiences. “Going from a small town to the larger world, I saw different types of people, and I wanted to expose people to many different types of things.” That value for life is a feeling he’d like to spread to others through this project. “Life is the most precious resource; that power doesn’t come from anywhere else. It’s so rare, we should explore it. I find it absolutely ludicrous that people are racist or sexist. And I’ve found that the more that I explore and the more bizarre creatures I see, I’m more accepting of other people. If I can show people some really wild, wacky things, maybe somebody somewhere will say, ‘If I can accept a multi-tentacled three-eyed burping weirdo being from the edge of the galaxy, maybe the guy over there with the darker skin doesn’t bother me so much.’ Maybe through this project, we can all be a little more connected.”

Find out more about Mat Powers and the Paradox League at paradoxleague.com.

Want to know more about what goes on at Gen Con? Check out last week's insider article here.